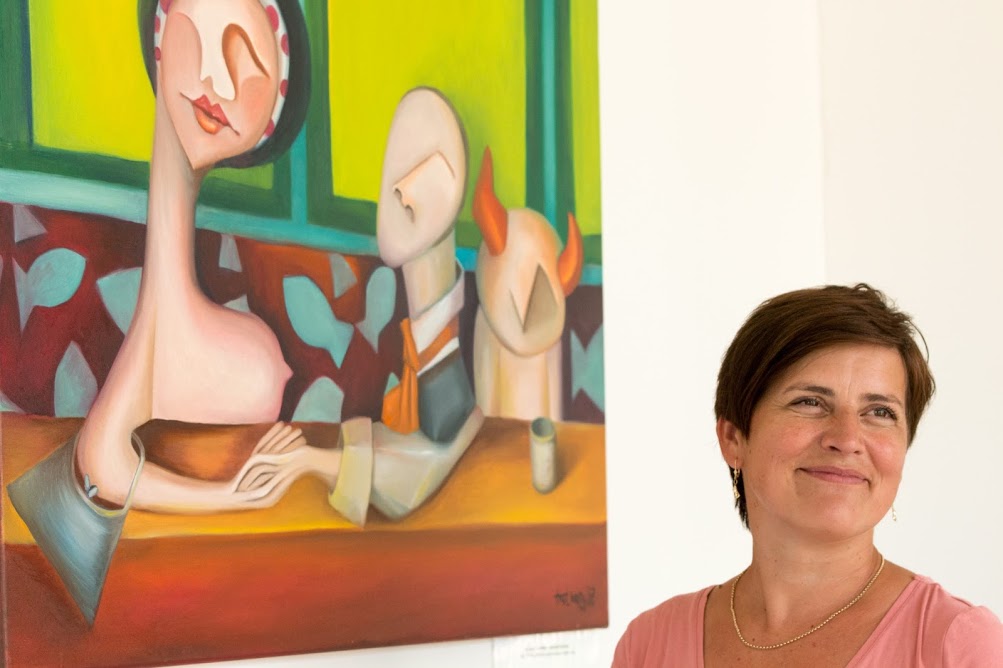 Having grown up in Orosháza, Hungary she had her first successes in kid’s drawing and painting contests sponsored by local corporations. Although she was admitted to the Fine and Applied Arts High School in Budapest, her parents advised her to start attending the local high school in Orosháza. After graduation she started her studies in the Legal Faculty of the University of Szeged from where she graduated in 2001. Painting and arts were part of her life all along the way as she kept contributing with graphics and design to the university’s student newspapers and various campaigns.

The journey to Louvre, Paris

In 2005 Viktória opened her artwork to the public both in online channels and in a number of regular exhibitions including solo as well as group events. Shortly she contracted with ArtArea Gallery, an online arts gallery and agency that facilitated selling many of her early paintings to private owners. Digitally these pieces of artworks are still published in Art-Area’s online gallery.

In 2009 she was approached by Tibor Szőnyi, curator of Opera Gallery to whose invitation she participated in a group exhibition hosted by YTrip Art Gallery in Tokyo’s artists’ quarter. The exhibition celebrated the 140th anniversary of the Japanese – Hungarian diplomatic & commercial relationships. ‘Hungarian Spirit’ as the event was titled was opened by the Ambassador of Hungary and received news coverage both in Japan and in Hungary.

The next years brought along commercial successes. Her artwork was purchased by various private owners including the Artecorum Gallery in Switzerland who commercialised dozens of her artwork as well as private individuals in France and in Hungary.

Founding the Artist Colony of Halásztelek

After having published her articles in Halásztelek’s local periodical the local art’s life started to blossom, many artists emerged supporting the plan. A local artist community started to take shape and all that ended up in founding the Society of Artists of Halásztelek. In the same year the Artist Colony was founded too and Viktória was  a founding member.

The Artist Colony operated an annual arts camp and over the course of the last half decade has hosted hundreds of artists representing a variety of nations. The artworks created during the weeks of get together are owned and managed by the Society and it is intended to form the basis of the public art collection of Halásztelek.

From 2011 Viktória has been the executive officer of the Society of Artists of Halásztelek, in 2013 she was also amongst the founding members of the former Halásztelek Gallery.

Referred by Mr. Gábor Prodán, the pastor of the Greek Catholic of Halásztelek she has painted a mural decorating the Church. The fresco pictures wine and grape and is open for the public in the opening hours of the Church.

Starting from 2005 when she first participated in a group art exhibition in Budapest (Zugló), Palace Stefánia, her works have appeared in numerous exhibitions and galleries in a number of countries ranging from Paris, France (Carrousel du Louvre) to Tokyo, Japan and including countries such as Germany & Switzerland. One of the latest exhibition took place in Hortobágyi Lovasnapok 2017, an event that attracted tens of thousands of visitors.

In 2015 she published her first book, Varázslatos Festőműhely (Magical Painting Workshop), a book that explores the world of painting and arts in a journey hosted by Viktória’s daughter. The book was published in hard copy as well as in e-book formats.

Viktória has been an active teacher for about a decade giving private arts lessons and organising art camps to a wide audience ranging from young kids and adults to elderly people.

She has founded drawing contests that are open country wide in Hungary, such as “Fogadd el! ” (Accept it!), a competition for the differently abled. In 2017 she was nominated for “Jószolgálat-díj”, a noted goodwill and charity recognition award in Hungary.

Viktória had been engaged in helping elderly people by developing their arts skills and capabilities since 2008. First she started a painter club in an elderly home in Tököl, later in Halásztelek as well.

Her colourful figures decorate the walls of a number of nurseries, schools, patient’s rooms in medical institutions. From 2016 she has decorated the entire pediatrics departments  in Orosháza and in Karcag, in two significant hospitals in Hungary.

Since 2011 she has been collecting donations (initially as of the work of the Society of Artists of Halásztelek, later continuing charity as a private individual) in the forms of clothes, books, toys and she also contributed to the logistics of delivering the donations to the people and villages that are in deep need.

From 2017 she was elected to the panel for creating and hosting the annual kid’s ‘Fairy tale day’ (Mesenapok) in Halásztelek.